Waste of Worth By Bethany Kris NEW RELEASE - REVIEW 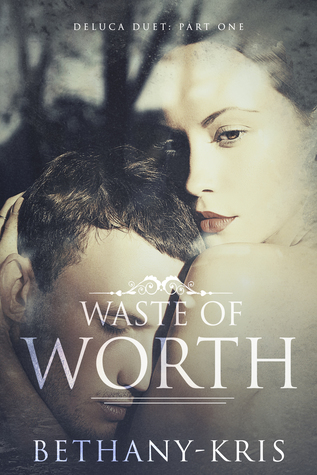 Ask anyone and they will all say the same thing about just who Dino DeLuca is. A criminal, the son of a traitor, and a mafia Capo who can’t be trusted. His past has shaped his life, creating demons he can’t escape from that live in his mind day and night.


He is all too aware of just how people see him.
Closed off.


He doesn’t care—keeping people out means no one can get close enough to hurt him again, and he already has one too many monsters with their claws stuck in his back that he’s still fighting off. His walls are so high, no one is climbing over them. Or so he thinks …

Karen came into his life like a spring shower, her light shining through the darkness and making him see something other than the hell that surrounded him for so long. She doesn’t know who he is or what he has done to become the man he is today. If he can help it, she’ll never know, and his monsters will never hurt her.


She sees his differences as beauty.


She never asks for more.
She is perfect.


The problem with happiness for Dino DeLuca is that his monsters don’t mind taking away what makes him happy. After all, what isn’t given cannot be kept.

These lessons will be the hardest he has ever learned.

Above is my first reaction upon the synopsis release for this book.

****SPOILER ALERT****
After Dino left us in the first book, I spent all of the third book convinced that at some point he was going to meet up with Theo and answer all my questions about their cryptic conversations and how they conspired together so well to fake his death.
Sadly I got to the last page of the amazing Scarless and Sacred and there was still no Dino.
So a part of me had to accept that Dino's story was over and I was never going to know more about him. Dino was the spark that started the flame that became the raging fire of The Chicago War and he had nothing to show for it.

Then Bethany Kris decided to make my life even better after everything she's already given me by releasing this duet. Part 1 covers a period of time completely before Deathless and Divided begins and it allows us to see major players before the mountain of stress that becomes their lives later on and its really fun for people that have read the series.

Waste of Worth reads well as a standalone as well which pleasantly surprised me. Dino's story is adorable. Dino comes across as a hard man both her and in the later series for good reason and it's so nice to have a series in which he is able to open up and be a little bit free. Karen was also a pleasant surprise. Some characters are so closed off you can only wonder who the angel is that's going to be able to burrow their way inside and it's Karen.
Karen is completely unlike any of Bethany Kris' other heroines and it's amazing. She has no concept of mafia life, she's just a woman that wanted to make a man smile.

Waste of Worth ends at an amazing cliffhanger point and I'm just so excited thinking about what comes next. What I loved most about this book is that even though I know the generic plot of what's next, I genuinely have no idea of where we're going.