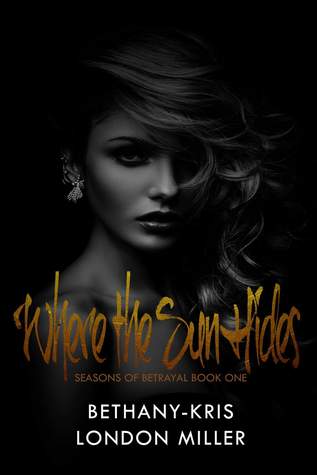 Violet Gallucci and Kazimir Markovic have grown up in the same city, but on opposite sides of the game they call life—Violet, an Italian principessa della mafia, and Kaz, a Russian Bratva heir. Lines have been drawn, and they know not to cross them.
Their paths crossed once, a long time ago, but when they meet again, the territory and rules set out by their families that have kept them separated seem to bleed away.
She's more than her last name …
He’s more than a Russian …
But secrets from the past—and the people determined to keep them hidden—have other plans for Violet and Kaz.
Rival families.
One city.
Star-crossed lovers.
They should be enemies.
It could mean war.
This is just the beginning …
From authors Bethany-Kris (The Chicago War) and London Miller (Volkov Bratva) comes a thrilling, sexy new series—Seasons of Betrayal. Where the Russians and Italians clash in culture, mafia … and love.

Hi, yes I am still devouring all things Bethany Kris thank you very much. It's going very well for me.

Oh my God, if only I even knew where to start with this book. In the words of Julie Andrews: "Let's start at the very beginning, a very good place to start."

This book starts with Violet and Kaz meeting as children whilst their parents, not only from opposing mob families, but from opposing types of mob families are meeting up to have a shady side deal. I promise you, it may not seem like it but this opening scene really sets the scene for the entire book. With this chapter we are shown who our characters really are and I believe we are given the option of whether to believe it or not.

Fast forward 17 years and Violet is finally 21 and ready to party. Obviously she parties in Russian territory or there wouldn't really be a book but with this, we get to meet grown up Kaz and I think we all deserved that. It's so easy to dismiss this as a mafia novel or a romance novel but honestly, it's a life novel. During the book Violet learns a lot about what she and her friends/the people in her life are capable of and where she stands on that. Violet learns that not everybody can be trusted and that it's perfectly fine to maybe be on your own for a while until you find people worthy of your time.

The supporting characters on Violet's side were well written but generally vile whilst the supporting characters for Kaz were in general much more pleasant with the exception of his *Ahem* interesting father. I'm really looking forward to seeing where they all go next as I can tell they will continue to be developed which is awesome!

There's one seriously messed up scene in the book but oh my gosh was it worth it. I both didn't want to read it and was near gleefully devouring every word to see exactly where it was going to be taken. This book and subsequent series also makes me feel like this. I absolutely don't want it to end but I'm so glad I've got to read it and make it a part of me.

After that cliffhanger, I'm waiting for the next book like:

Your move Bethany and London!

I'm so glad London Miller has books out because I know where I'm going next!

Recommend to: everyone, you deserve this in your life, you're welcome
Rating: 5 stars