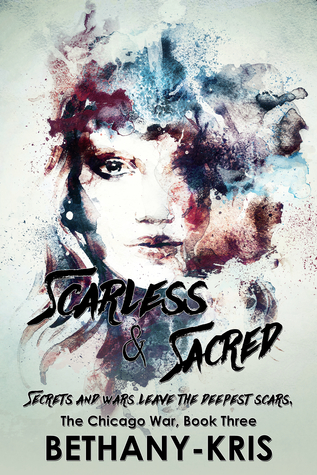 Secrets and wars leave the deepest scars.Evelina Conti has always worn a mask. She is an Outfit principessa, respected and adored. She wasn’t allowed to be anything else. Her father went from a grieving husband to the Outfit boss, and now that Riley heads the family, Eve is more suffocated than ever. No matter how much she hates it, the Conti princess still has a role to play. A little attention from Theo DeLuca seems innocent enough, but nothing is when it comes to him. And certainly not when everyone believes that Theo is out to kill her.Theo DeLuca has a target on his back. His biggest problem is figuring out who put it there when everyone is aiming at him. He doesn’t need a woman causing him issues, but the Conti princess keeps showing up at the worst times, and he’s the one left saving her. Between the men surrounding him that Theo can’t trust, and the past he can’t outrun, Evelina might be the one thing he doesn’t have to question. But when Riley decides to use Eve as his next move, even Theo might not be able to save her.The war in Chicago is not even close to being over. This game is deadly. Each hand played cuts another mark into someone else. The Outfit boss is struggling while the men around him are rallying. As the body count continues to rise, the families keep losing.Sacrifices are a part of war. No one will walk away from this without scars.***PLEASE NOTE: Scarless & Sacred is not intended to be read as a standalone in this series. It is the third book in the series and should be read after the first two books. Trigger Warning: Scarless features graphic violence and scenes of past abuse.

THIS BOOK IS JUST CRAZY.  This is the penultimate book in this series and it honestly just put everything out there. Everyone is crazy, everyone is making me worried for them and it's just so good to read!

Theo DeLuca is the brother of Lily from the first book and Evelina Conti is the sister of Adriano from the previous book and Lily's best friend. This means that we get to see Lily, Damian, Alessa and Adriano a lot in this book and I love it because I hate saying goodbye to characters.

I have to say, Theo is honestly my favourite of the bunch (Damian is my 1.5) which makes sense because Lily is my favourite girl, so score 1 for the DeLuca family (this generation anyway, am I right?). He's just a little lost soul trying to do right by his family, his woman and keep his head down - but this is a mafia book so obviously he's going to have to fight a bit harder for it. Evelina is a Principesa and as such always follows the rules until she finally gives in to Theo and allows herself a bit of freedom.

Theo and Evelina's story is honestly so great to witness because there's so much going on around them it's hard to see the light at the end of the tunnel and you can feel the desperation of not only Theo and Evelina but everyone around them as the War enters it's last stages. This book was great for me as due to the family ties it links up perfectly with Deathless and Divided and gives us a bit more backstory to events that have occurred.

As the penultimate book the war is going full steam ahead but this book gives you hope for which direction the war will go in and *Tyra Banks voice* who will be on top?