Fuel The Fire by Krista and Becca Ritchie REVIEW

I hadn't been particularly vocal about it, but before this book I didn't trust Connor. He had some very nice moments with all the other characters that made me want to respect and love him but as said by Lily in Hothouse Flower (about Ryke, but it applies) "He sees what you give him, and you're not giving him a lot"; Connor from any one else's point of view isn't Connor and I think it's really hard for me to remember this.
Anyway so Fuel The Fire was perfection, as I have come to expect from Krista and Becca. They never take the easy option and as much as it pains me when I'm reading the books, it is truly a talent that has allowed their books to shine in the way they do. Never in a million years could I have guessed the plot and I'm just glad that I didn't/couldn't. I think, as mentioned in the book, Connor and Rose's love is the hardest to see from the outside because they're not open people regarding anything in their lives, especially something as private as their relationship. As a result, when reading from other POVs it's a lot harder to  see Rose and Connor as who they actually are - unless we're in Lily's POV because "nerd stars".
I believe I've mentioned this before but I've yet to read one of the Ritchie's books without crying. The love that Coballoway have for each other, Jane and their extended family is beautiful. Even when Connor makes dog jokes at Ryke's expense. Okay, almost.
Connor actually gives one of my favourite book speeches of all time in this book and I honestly felt his indignation alongside him. This book honestly was more than a book for me, it was an experience and I'm so glad I got to be a part of it.

Recommend to: literally everyone, I cannot recommend any of Krista and Becca's books enough
Rating: 5 Stars
Posted by Aisha Reads Books at 23:06 No comments:

Not You It's Me by Julie Johnson REVIEW NEW RELEASE

Gemma Summers is unlucky in love.She’s known it since third grade, when her first crush blew a spitball into her hair, and a decade-long string of bad dates, boring sex, and abysmal morning-afters has done nothing to improve her prospects. But when a random radio call-in contest lands her courtside tickets to the hottest playoff game of the season, Gemma’s luck may finally be on the upswing — even if it doesn’t exactly seem like it when the dreaded jumbotron kiss-cam lands on her and her date, who’s too busy ignoring her to notice… Chase Croft doesn’t date.Despite ample opportunity as Boston’s most eligible bachelor, the reformed bad-boy would rather put his energy into taking over the family business than weed through a world of gold-diggers to find an honest woman. But when the beautiful girl in the seat next to him becomes a courtside spectacle at the hands of her loser boyfriend, he can’t help but step in and save the day. One kiss. Two strangers. No strings attached.The only problem is, Chase is used to getting whatever he wants. And after kissing Gemma once, he knows one thing…He wants more.
NOT YOU IT’S ME is a full-length, standalone contemporary romance about a girl who doesn’t believe in love… and the man who changes her mind. Due to sexy-times and strong language, it is intended for readers 17 and up.

I read my first Julie Johnson book about two weeks ago as the last book I brought before going on holiday. Say The Word kept me captivated the entire way through and I just knew my next Julie Johnson book would be amazing as well.
Not You It's Me certainly did not disappoint. Gemma is a really fun character and never feels too perfect. Every choice she makes is entirely understandable not because she is perfect but because Johnson has really allowed her character's personality to shine through. Without it being said, I'm fully aware that Gemma has her own coping mechanisms that she's aware she has to deal with, and that going through the process is okay. Gemma is proof that your main character doesn't have to be perfect and that her love interest doesn't have to place her on a pedestal to make us believe she is worthy of love.

Chase is probably one of the more ideal male characters I've read, I'm not that big a fan of the "alpha male" character because 9 times out of ten it goes straight into asshole territory so I was glad that Chase was not. Chase's issues are a great accompaniment to Gemma's story line which definitely helped this book be even better.

Gemma's best friends were honestly the best; they were so supportive and not afraid to tell Gemma when she had messed up which to me is a real sign of friendship. Most importantly, I think that more recently with more and more people moving farther away from their parents be it for university/work, they are Gemma's family away from her family.

Overall, I thought this was a very humorous book and it kept me on my tiptoes right until the very last page. A great read.

Posted by Aisha Reads Books at 20:20 No comments:

Email ThisBlogThis!Share to TwitterShare to FacebookShare to Pinterest
Labels: 4 stars, favourites, funny, Julie Johnson, New Adult, new release, Not You It's Me, ya chick lit 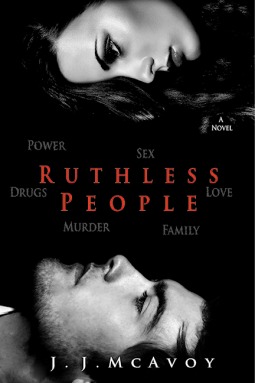 To the outside world, they look like American Royalty, giving to charities, feeding the homeless, rebuilding the city. But behind closed doors is a constant battle for dominance between two Bosses, cultures, and hearts.
Ruthless People is a romantic crime fiction set in modern day Chicago, following the life and marriage of Melody Nicci Giovanni and Liam Callahan—rivals by blood and leaders through fear. Their marriage was arranged by their fathers in hopes to end years of bloodshed between the Irish and the Italians.Liam, next in line to lead the Irish, believes he’s getting a simple-minded wife, one he can control, one who bends to his every need . . . the complete opposite of Melody. Bred to be a Boss, a world-class marksman, master of disguise, with no mercy and no fear. Twenty-four years later, she has achieved more than any man could even dream of, killing anyone who steps in her way. She knows exactly what type of man Liam is, and she would rather die than give up the power she has spent her whole life building. But with no other family left, she must not only learn to work with Liam, but the whole Callahan clan.The Mafia of the past is evolving, and with rival bosses gunning for them, Melody and Liam will have to figure out how to work as one to take down those who stand in their way, all while keeping up appearances.Power, Family, and Respect are everything.Warning: This book contains adult language and subject matter including graphic violence and explict sex that may be disturbing for some readers. This book is not intended for readers under the age of 18

My least favourite crime trope is the "reluctant wife", this wife listens to her husbands's sins, pretends that she loves him enough to look over it, then remember ten years down the line that she is a "moral person" and can no longer live the life.
Honestly, I find it to be boring and insulting to women. Imagine my joy when I picked up this book.
Melody Giovanni is not the meek subservient wife, she is The Boss. Liam is next in line to be the head of the Irish Mob so long as he goes through with his arranged marriage to Melody. They are equals. Liam believes that Melody is just the daughter of the boss of the Italian Mafia and so assumes that she will just be a convenient participant of an arranged marriage rather than a counterpart. (Super feminist, I know)
Melody and Liam's first meeting actually had me laughing out loud, it was so ridiculous - in a good way. Liam goes into the meeting with no real knowledge of who she is, or even what she looks like. All Liam can do is hope that Melody isn't ugly. He gets his wish, but she's also not as compliant as he'd hoped. Melody wants an equal partnership in the business, and honestly she deserves it.
Like all books, this book has it's weak points but for me it's best quality, the quality that makes it a five star read is that Liam and Melody are on the same page. Even when a situation makes them both so angry they could kill the nearest person, they are the same person and it's beautiful to see.
If Liam wants to kill someone, it's taken all of Melody's energy not to pull the trigger, and vice versa. Honestly, I kind of wanted them to adopt me.

To end this review, I will use a quote that I think really sums up this book/series for the MCs:

"Whatever our souls are made of, his and mine are the same." - Emily Bronte, Wuthering Heights