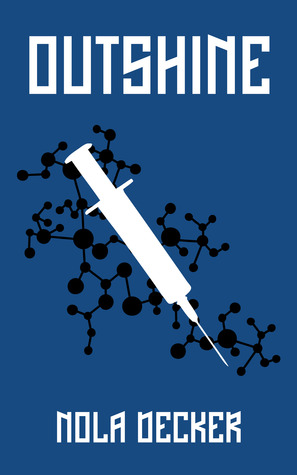 When agoraphobic Gabe and his outgoing nemesis Jessa go on a moonlit road trip to locate Gabe’s missing brother, the two teens discover they are both hiding unnatural abilities: Gabe is a living lie detector and Jessa is a kick-ass powerhouse pretending to be a delicate diva.Gabe’s sole reason for searching for Watts, his hot-tempered younger brother, is to clear his own name: he’s been framed for Watts’ alleged murder. Jessa is after Watts because she is, well, after him.They find him with Deacon, the twisted eugenicist responsible for their unusual powers. He encourages them to stay and join his "Family" where they'll be able to live openly as the genetically-modified freaks that they are. When Jessa and Gabe uncover the truth about Deacon's past--and what he wants for the future--they band together to stop him. Watts, however, may have other plans . . .

I have to say until recently I've actually stayed away from Sci-Fi both in books and on television but this reminded me that clearly I'm making a big mistake.

The story starts with Gabe being told his brother is missing and being happy about it which at first I found a bit odd but honestly, we literally just have to meet Watts to be like "Nah, your initial assessment was spot on, carry on"
I liked that the truth about Gabe and Jessa was revealed very early on, there's nothing more I hate than having it be so clear that there's something "other" about the characters, and it's in their POV but you still can't be told what is actually different about them.

Gabe is a human lie detector and Jessa has unbelievable speed and strength, and we find out that they are experiments and now the people that "created" them want them back and we find Gabe and Tessa fight for their lives and their right to live their lives considering they didn't sign up to be the way they are.

As soon as I got into this book, I found it breaking into my daily schedule until I read it for a solid 4 hours, it was very enjoyable and I'm very excited where the sequel will take the story.

Recommend to: fans of YA, fans of Sci Fi, people willing to try new books
Rating: 4 stars
Posted by Aisha Reads Books at 20:31