The Time of Our Lives by Jane Costello REVIEW 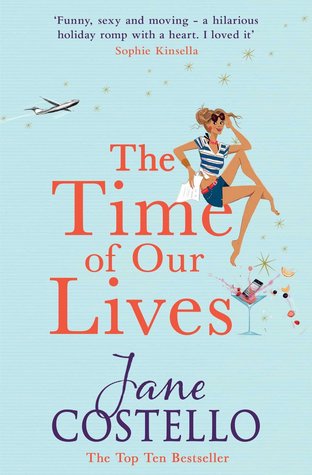 Goodreads      Amazon
Imogen and her friends have had their fill of budget holidays, cattle-class flights and 6 a.m. offensives for a space by the pool.So when one of the group wins a VIP holiday at Barcelona's hippest new hotel, they plan to sip champagne with the jet set, party with the glitterati and switch off in surroundings of unapologetic luxury.But as they mingle with movie stars, mafia bosses and millionaires, it becomes clear - with riotous consequences - that even in the most glamorous of locations, things can go wrong. Very wrong . . .

Firstly, the plot; I loved it, I'm a sucker for best friend stories (check out Bridesmaids by Jane Costello too) I laughed at loud at so many moments, mostly because it's somehow delightfully unbelievable just how much trouble one woman can get into in a singular week. As the blurb tells us, Imogen goes on what should be a dream holiday with her two best friends Nic and Meredith. Meredith is heavily pregnant but why should something as silly as a bump get in the way I guess? Imogen initially meets Harry, a cute, sweet man, in the business class suite before boarding their flight to Spain. Well, I say meet, she literally bumps into him with a plate full of food and a glass of Bucks Fizz.

Imogen is bombarded with multiple calls from her overly worrisome mother and her dumbass boss (David) who has somehow managed to find himself in a sex scandal whilst being CEO of a company. Very smart.

Through this all, Imogen is trying to mend her own broken heart that has occurred as a result of a terrible break up. Imogen's necklace is stolen and it's to a necklace she keeps from sentiment for her past relationship. This is a sweet mini plot point.

Okay, so Imogen's boss "got to third base" with a fellow passenger on a plane and despite Imogen being on her first holiday in over 5 years, it's suddenly up to her to fix up his mess, and on top of that their normal PR company has gone under so not only does she have a complete PR nightmare, but she has to find a new PR company to help fix this (of course David doesn't help with this initially) and it's chaos. The new company recommended to her gives her a 22 year who was "born to do this. It's my vocation" who's about as helpful as a bucket in a flood. A recurring theme in this book is that basically everyone BUT Imogen ends up going on holiday which is hilarious in a mean way. So long story short, our hopeless 22 year old also fucks off on holiday.

Thankfully, David steps up (first out of maybe 2/3 times in the entire book) and remembers that someone he golfs with is a PR executive. This guy is actually legit and poor Imogen has to do a radio interview with minimum training that turns out to be live when she was told it was going to be prerecorded, putting it nicely, she puts her foot in it. If I was mean, I would say she was talking shit out of her mouth, but I'm nice so I won't.
At this point David has fucked off to Scotland to avoid the press, kindly leaving his wife and children to deal with it which should really tell you everything about David by now. Scotland has minimal reception and after being encouraged to put down her phone for a night, we get a series of voicemails hearing David having to stay outside and finally being soaked in the rain and it's brilliantly funny. 5 points to Jane Costello.
As mentioned before, Imogen's life is just one mishap/disaster after another, so it should come as no surprise that her early meetings with Harry are terrible, including an incident in which she decides that he's stalking her for a story and let's him know that it's not cool. It's always fun to read and Costello manages to stop it from going into complete cringeworthy states. (you know some books have made you put them down from pure embarrassment.) Finally, Harry and Imogen get to a good place - a very good place *wink wink nudge nudge*- and they have to work out their feelings, Imogen as having slept with the first person since her ex boyfriend, and Harry from being unsure whether he could ever find real love but it all comes together nicely
However there's still the issue of him having made a promise ten years ago, that he's determined to keep.
Then Harry decides to write a letter. This is the only point in the book in which I rolled my eyes, but it was with affection, I promise. Harry decided to go all Mr. Darcy on Imogen with phrases such as

which made me laugh, because as I said, I felt Mr Darcy vibes and every time I get those, I just see Colin Firth looking very nice with dodgy sideburns. Adaptations aside, I think the romance was done beautifully and carefully and like with all of Costello's books, never felt too rushed.

Now, for the other characters: