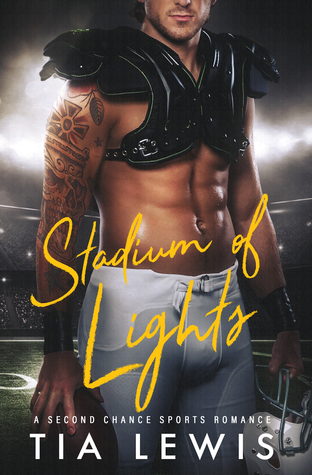 
He can’t help claiming her. But can he love her?
Max Anderson enjoys all the perks of being a star NFL quarterback―including the women. He has no intention of changing his carefree, hard-loving lifestyle … until a twist of fate reunites him with the girl he knew growing up.Abby Morrison has worked hard to become a physical therapist. She knows she needs to keep things professional with Max―but the truth is, she’s always loved him. Back then, she hid it. Now, it’s not so easy.As they rekindle their friendship, the heat between them is impossible to ignore. Soon it flares out of control, and the fallout threatens to ruin everything. Can they salvage a future together ... or will the consequences wreck their lives?


Stadium of Lights is a second chance romance that I found pretty adorable. We get to meet Max and Abby who used to know each other when they were children until their teenage years. Max is the athlete so he's always had girls throw themselves at him whilst Abby was his constant, staying in the friend zone.

Flash forward about seven years and Abby is no longer the awkward girl that was Max's best friend but Max is still the quarterback. Having gained a degree in physical therapy, Abby is ready to move back to the US and as fate would have it - the team that hires her is where Max plays!

I have to say, I wasn't really feeling Max as a character, he came across as very asshole-ish and never really did anything to redeem himself from that part of his personality, however Abby has been mildly in love with him for so long with him being like that, maybe she wouldn't even know how to deal with him if he changed ;) However, Max was not without his good points and they played very well of Abby's character who I really loved and respected. Abby was a fully fleshed character without ever feeling like a trope.

I think this book was a really cute quick read but I absolutely wouldn't be opposed to it being a series. However, the writing did interest me enough that even if this world isn't expanded, I'm definitely going to look in to Tia Lewis' other books!
Rating: 3 stars!
Posted by Aisha Reads Books at 22:23