Amazon       Goodreads        Twitter
Sydney Sage is an Alchemist, one of a group of humans who dabble in magic and serve to bridge the worlds of humans and vampires. They protect vampire secrets - and human lives.
In The Fiery Heart, Sydney risked everything to follow her gut, walking a dangerous line to keep her feelings hidden from the Alchemists.
Now, in the aftermath of an event that ripped their world apart, Sydney and Adrian struggle to pick up the pieces and find their way back to each other. But first, they have to survive.
For Sydney, trapped and surrounded by adversaries, life becomes a daily struggle to hold on to her identity and the memories of those she loves. Meanwhile, Adrian clings to hope in the face of those who tell him Sydney is a lost cause, but the battle proves daunting as old demons and new temptations begin to seize hold of him...
Their worst fears now a chilling reality; Sydney and Adrian face their darkest hour. 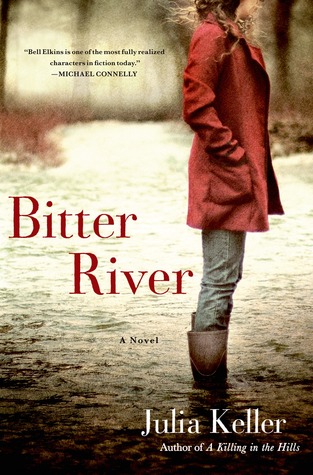 Amazon               Goodreads
Phone calls before dawn are never good news. And when you’re the county’s prosecuting attorney, calls from the sheriff are rarely good news, either. So when Bell Elkins picks up the phone she already knows she won’t like what she’s about to hear, but she’s still not prepared for this: 16-year-old Lucinda Trimble’s body has been found at the bottom of Bitter River. And Lucinda didn't drown—she was dead before her body ever hit the water.With a case like that, Bell knows the coming weeks are going to be tough. But that’s not all Bell is coping with these days. Her daughter is now living with Bell’s ex-husband, hours away. Sheriff Nick Fogelsong, one of Bell’s closest friends, is behaving oddly. Furthermore, a face from her past has resurfaced for reasons Bell can’t quite figure. Searching for the truth, both behind Lucinda’s murder and behind her own complicated relationships, will lead Bell down a path that might put her very life at risk.
Review ahead!

Read more »
Posted by Aisha Reads Books at 16:18 No comments:

Two years will change them forever.

When rumors spread like wildfire—like having three-ways with her boyfriend’s rock climbing brother—Lily Calloway spirals into a dark place. Her bedroom. Loren Hale is more confident and determined to keep their sex life private, even from their friends, and he helps Lily in the only way he knows how. But how much love is too much?

Their lives are filmed, watched, and criticized. And through it all, Lily and Loren have to face enemies they never thought they’d see, demons they don’t know if they should bury, and setbacks they didn’t think they’d meet. Not this soon.

And one rumor could be too much for them to handle. It will test their greatest limitations, and if they don’t hold onto each other, someone is going to drown.

A full-length New Adult Romance that bridges the gap between the second and third books. Thrive must be read before Addicted After All if you have not read the Calloway Sisters spin-off

I started the Addicted Series in February and luckily for me just after Kiss the Sky was released. As a series it has transcended any and all expectations I've ever had of it and even better, taught me about important things such a friendships, and moral/social issues that a lot of the time we don't even think about.
To top it off, in addition to being amazing writers, Krista and Becca are so interactive with their fans (e.g this blog tour) and I'm so glad I got the chance to read their books and talk to them.

In a non-sexual way. Just to be clear.

“Lily,” Lo says, his lips right beside my ear. “Breathe.”

I realize that I’m taking slow, shallow breaths. My forehead sweats, and my upper lip is probably

perspiring. How sexy. “Lo,” I whisper over the shouting paparazzi, snapping photos and hollers to move back!

from Ryke. “Are we going to make it?”

Goodreads          Twitter
Rapunzel isn’t the stereotypical Damsel in Distress. Her Bad-Boy Prince Charming is a renowned mercenary, and their Happy Ending plays out like a bad movie. However, she is determined to breakout from her tower prison—love be damned—and do it in a fabulous pair of heels. ***Gunned down by the Mercenary, the deadliest assassin in The Badass Archives, isn’t exactly Rapunzel’s end-game. Falling for him isn’t either, but his Rated-R demeanor is strangely charming. Even though most girls wouldn’t fall for their captors, Rapunzel isn’t like most dames. Her major girl-boner for the Mercenary is so pathetic it verges on cliché. Yet, in spite of his appeal, Rapunzel must escape before she’s locked away in the Château de Immortelle’s highest tower—forever.

I did a cover reveal for this book a few weeks ago, isn't the cover gorgeous?

Review ahead!
Read more »
Posted by Aisha Reads Books at 14:13 No comments: