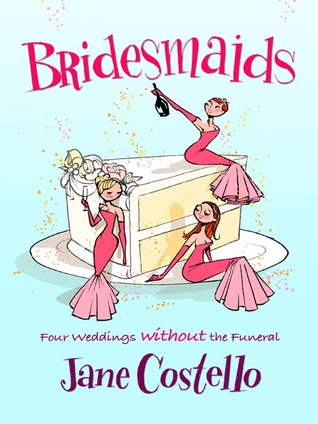 Goodreads        Amazon      Twitter
With less than an hour to go before her best friend, Grace, is to walk down the aisle, Evie is attempting to fulfil her most important bridesmaid role: to deposit the bride at the start-line at the appointed time. But with a bride famed for her chaotic sense of time, and the bride's daughter busy mashing Molton Brown into the expensive hotel carpet, minus underwear, the odds are stacked against her ...At least she has her new 'chicken fillet' boob-enhancers to make her feel special. That is, until these are spotted poking over the top of her dress. So spotted by Jack - the most ruggedly attractive man Evie has ever laid eyes on.

Evie is twenty-seven; a sparkly, down-to-earth journalist. She has never been in love and has started to fret that she never will be. Small wonder, then, that the prospect of being bridesmaid at no less than three impending weddings is one that fills her with trepidation. Things get worse when Evie learns that Jack is her friend Valentina's date. Valentina is beautiful, shallow and self-obsessed. Her dates tend to be mirror-images. Which can mean only one thing: Jack can't possibly be as good as he seems. But as they sit together talking late into the night, Evie finds herself yearning to believe he's all real.

Spoilers and review ahead!

As mentioned before I have read this book before but reading The Time of Our Lives made me super nostalgic for Costello's first book, but my second Costello book and I love it so much. I forgot some of the plot and it had me fighting laughter on the train.
Jane Costello has literally never failed to make me laugh.
As the blurb says, the book follows Evie through three weddings as a bridesmaid. Her best friend, her close friend and her mother, respectively. Jack manages to be a guest at all three weddings and pure embarrassment ensues.

At wedding one Evie manages to be there with THREE ex boyfriends (all? of whom turn out to be weird) and meet Jack for the first time. In an absolute cringeworthy moment she meets him in the corridor and think he's checking out her new chicken fillets but with all the running around she's had to do, they're hanging out of her dress in what I can only imagine looks like a low budget horror movie.

Wedding number two has Evie not check the canapes and well, let's just say that she's the type of person that should really check canapes. So that's more fun at wedding number two.

Wedding numero tres is Evie's mother's and her mother is a hippie in every sense of the word. She's super chill and has the weirdest style I've heard of and that's coming from someone who used to drive through Camden on a daily basis. Bless her though, it's sweet to see someone who's 100% confident in who they are and not care about other people's opinions.

Overall, my favourite part of the book was the strong friendship, these are characters that have been/are going/will be through a lot together and they've stuck together and created a family away from their families.